No Colour Black: Revelatory View Of Black Artistry in London

Posted on November 21, 2015 by lisaparavisini

CHRISTINE LINDEY recommends a challenging retrospective at the Guildhall Art Gallery in London in this article for The Morning Star.

AMONG the immigrants to Britain from the Caribbean in the 1950s were Guyanese political activists Jessica and Eric Huntley and this fascinating exhibition at the Guildhall art gallery honours and explains their instrumental contribution to the African diaspora’s politics and culture in Britain from the late 1960s on.

No Colour Bar brings alive the experiences and issues faced by their community through a rich and diverse display of their archival material, along with the literature and art which they championed, among them artists’ groups such as the Caribbean Artists Movement and Black British Arts.

To counteract the paucity of public support for African and Caribbean culture, the Huntleys founded Bogle-L’Ouverture Publishing.

Named after the Jamaican and Haitian revolutionary leaders, from 1969 it published seminal texts, poetry, novels, posters and greeting cards asserting the African diaspora’s cultural identity and fostering resistance to the sociopolitical injustices which it faced.

That same year they opened their west London front room as a bookshop and meeting place to encourage interaction between the community and its cultural workers. The bookshop moved to commercial premises in 1975 but consciously retained its informal, homely ambiance, generating a vibrant forum for creative and political cross-fertilisations and activities such as poetry readings by Linton Kwesi Johnson and Valerie Bloom.

It was renamed in 1980 to commemorate Dr Walter Rodney, the Guyanese thinker-activist assassinated for anti-colonial resistance at the age of 38.

An interactive multimedia installation by the Afro-Caribbean scholar-artist Michael McMillan recreates the bookshop’s ambiance and provides multisensory information about the ideas, preoccupations and historical events which conditioned black British life in the 1970s and 1980s.

Imaginative touch screens, digital photo frames, books and sounds introduce a plethora of themes such as readings by activists and poets or the story of the 1970s racist and fascist attacks on the shop and other progressive outlets, which led to their joint resistance through the Bookshop Joint Action Group.

McMillan’s installation is surrounded by a comprehensive exhibition of paintings by artists, some of whom like Tam Joseph arrived in Britain as children only to be stigmatised and undervalued for their colour.

Three portrait heads of the same young man challenge our gaze. Unsmiling as in ID photographs, they increasingly fill three identically sized, rectangular frames which are underwritten with comments in different handwritings, as in school reports.

In the first, Good at Sports, the boy wears a neat uniform and European-style short hair with a parting. In the second, Likes Music, he sports Afro hair and more informal clothes.

But in the last, Needs Surveillance, he sports long dreadlocks and his head totally fills its frame as if resisting the constraints of typecasting, while its title refers both to school discipline and police harassment.

The faces painted in red, white and blue assert the boy’s Britishness yet this identity is undermined by his society’s racial prejudice.

Sonia Boyce’s She Ain’t Holding Them Up, She’s Holding On depicts a lone young woman somehow managing to physically support two adults and two children from her raised hands but whose expression mingles resolute defiance with hurt and vulnerability. This is a powerful, feminist statement about Afro-Caribbean women risking losing touch with their sense of self as they shoulder the demands of others.

Martyred but defiant Kenyan warriors — one with his lips stitched together with thread — are furiously painted, blood-red paint dripping on raw, unstretched and torn hessian. Angry slogans such as “No Barclaycards here” and “No little white lies” culminate in the triumphant, anti-colonial “We are all pagans.”

A display of book jackets, posters and greeting cards sold in the Bogle-L’Ouverture/Rodney bookshop includes original artwork such as Errol Lloyd’s painting of the poet Accabre Huntley.

Its reappearance on her poems’ book jacket exemplifies the curators’ welcome refusal to rigidly demarcate between “fine” art and illustration.

Such sensitive echoes and connections permeate the exhibition. We hear speeches and poetry readings in the installation by authors whose books we initially discovered through the display of book jackets.

The exhibition can be experienced on many levels, ranging from visceral responses to the arts to a scholarly study of unfamiliar topics. There is much to see, learn and enjoy in this energising testimony of the socio-political power of arts. It’s free — go if you can.

For the original report go to http://www.morningstaronline.co.uk/a-0244-Revelatory-view-of-black-artistry

Posted in Uncategorized | Comments Off on No Colour Black: Revelatory View Of Black Artistry in London 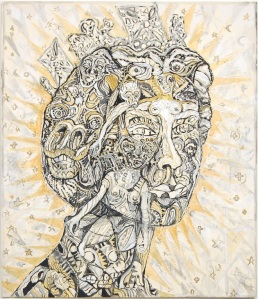 Exhibition features a piece by Elizabeth Butler now seen as an indictment of 19th century wars in Afghanistan – but viewed as a depiction of heroism in its time, Mark Brown of London’s Guardian reports.

It depicts the only known survivor of a shocking massacre and was seen by 19th-century eyes as an inspiring image of British heroism at the edges of empire. A more accurate reading might be as a damning indictment of a disastrous war in Afghanistan.

Elizabeth Butler’s The Remnants of an Army: Jellalabad, January 13th, 1842 – completed in 1879, during the second Anglo-Afghan war – was once one of the most important paintings in the entire Tate collection but has not been seen at the gallery for more than 50 years.

Then considered unfashionable, it was loaned to Somerset Military Museum in Taunton in the 1950s. But it is set to return to prominence after it was announced on Monday that it will feature in a major exhibition at Tate Britain exploring how the British empire influenced the creation and collection of art over 400 years.

The painting by Lady Butler, the most famous battle artist of the 19th century, will be a highlight, said the exhibition’s lead curator, Alison Smith – not least because it can be read in different ways.

“Butler belonged to a group of thinkers who were critical of British colonial policy,” said Smith. “This painting was partly produced to convey the idea of cycles – British history repeating itself, often with disastrous consequences. This was not picked up in the press or the wider realm, it was seen to be a heroic image of endurance and survival at the very edges of the empire.”

In truth it reflected Butler’s feelings about the horror and stupidity of war in Afghanistan, showing William Brydon, supposedly the only survivor from an army of 4,500 soldiers and even more civilians who were massacred over several days on a retreat from Kabul during the first Anglo-Afghan war.

It is the only Butler painting in Tate’s collection and returns, newly conserved, for the first time in more than five decades. Sir Nicholas Serota, director of the Tate, admitted: “It is an interesting question as to what impact it might have had, had it been hanging here 15 years ago?”

It will be shown near a work which is probably better known in Afghanistan than the UK. William Barnes Wollen’s The Last Stand of the 44th Regiment at Gundamuck, 1842 (1898) commemorates the end of the first Afghan war and shows the 44th East Essex regiment as they are overwhelmed in a last stand.

Similar to the Butler painting, it was praised as an image of gallantry and fortitude in the face of inevitable defeat. In 2002, British soldiers found the image being sold widely in Kabul markets Smith explained: “It is well known as a symbol of the Afghans defeating foreign invaders.”

The Wollen painting is being loaned by the Essex Regiment Museum in Chelmsford and will be one of 200 works from 55 lenders to feature in a show that has been planned and researched for four years.

Smith said the complexities and sensitivities of the subject have made it the most difficult project he has worked on, adding: “We’ve had intense debates and arguments about what should be included, how to approach the subject.”

The exhibition, which will also feature contemporary work by artists including Hew Locke, asks if our perceptions of empire are shaped by the art that survives.

Tate has its own connections to empire, not least because Tate Britain is on the site of Millbank prison from where prisoners were deported to Australia in the 19th century. it also bears the name of Henry Tate, the industrialist who made his fortune after acquiring the patent for the sugar cube.

There will be works in each section that address issues of the slave trade but none of them show its true nature. “There is very little visual evidence of the horrors of the slave trade,” said Smith. “It is conspicuous by its absence.”

Instead here are works such as a 17th-century painting by Nicholas Pocock of a Bristol frigate picking up slaves on the west coast of Africa. “It is a very gentle landscape,” said Smith. “You might say today, how can someone represent such a horrible subject in such a gentle way?”

The exhibition will include work by artists including Johan Zoffany and Anthony Van Dyck, as well as George Stubbs, who is represented by a magnificent painting of a cheetah reluctant to chase stags at Windsor. There will also be artists from North America, the Caribbean, the Pacific, Asia and Africa.

Smith said it would also show how British mapmakers obliterated the identity of indigenous peoples and how Aboriginal art was disregarded by British artists and collectors who “did not have the cognitive or aesthetic framework to appreciate [it]”.
Some of the other highlights include a striking 1937 photograph by Yousuf Karsh of John Buchan, author of The Thirty-Nine Steps, in his role as governor general of Canada. He is shown wearing a magnificent headdress given to him by Chief Shot Both Sides, which was later given to the Scouts and now, incredibly fragile, is housed in a metal cupboard in Bournemouth.

For the original report go to http://www.theguardian.com/artanddesign/2015/jul/20/artist-and-empire-tate-britain-elizabeth-butler-cryptic-imperialism

Posted in Uncategorized | Comments Off on Artist and Empire at Tate Britain: Cryptic Paintings of Violent Imperialism
Loading Comments...